Can Vegans Be Fun?

Can Vegans Be Fun? 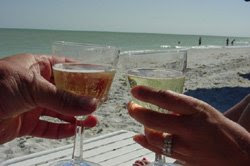 My local newspaper has recently been running a string of letters to the editor about diet. I wrote last week defending the healthfulness of veganism and advocating for this way of eating. Several replies popped up on the paper’s website. They were mostly the usual stuff: Vegan diets are too hard to plan, too expensive, vegans have a moral superiority complex, how do you know that plants don’t feel pain, etc, etc.

But the comment that caught my attention was from a guy who noted that I could eat what I want but he was headed out to throw a steak on the grill–and open up a cold beer from the local microbrewery.

It’s the kind of retort that makes me realize—once again—that people have absolutely no sense of what it means to be vegan. What does beer have to do with anything? I fired off a response to assure him that (some) vegans do in fact drink beer—and wine, and cocktails, and we eat chocolate and potato chips and French fries. I know it isn’t going to make a difference where he’s concerned. His mind was made up and nothing would convince him that a vegan diet can be fun and delicious.

But I would really like the world to know this: We vegans are just like everyone else. We like food that is tasty and fun and convenient. We like to be warm in the winter. Some of us like cute shoes. We just happen to believe that it’s not our right to use animals to fulfill those desires.

Yes, it’s important to eat healthfully, and I blogged recently about good health as good animal advocacy. But fun vegan food is good activism, too. And you don’t have to eat “whole plant foods” 100% of the time to be healthy, anyway. An all-or-nothing approach to healthful eating only undermines efforts to attract people to a vegan diet.

The best moments in vegan activism come when someone looks at the way we eat and says “Wow—I could do that.” And let’s face it—the more vegan brownies we bake, the better our chances of eliciting that response.